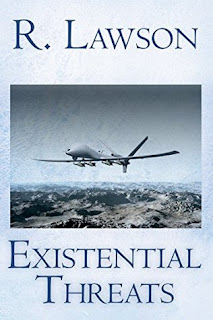 The CIA's incoming Director of Counter Terrorism, Biff Roberts, is inheriting a multitude of challenges. For starters, there is the existential threat of a nuclear Iran. Added to that, the Middle East has become enmeshed in a surge of radical religious extremism ranging from fanatical Muslims of the Islamic State to the Taliban, groups who commit unspeakable atrocities using violence to pursue their atavistic goals. Syria’s civil war could result in Assad's weapons of mass destruction getting into the hands of the splintered groups of Islamic Jihadists fighting there. This radical ideology has now spilled over into Africa with furious intensity.

And as if these international problems were not enough imminent threats to confront, Iranian mullahs have issued an Islamic death warrant fatwa on Biff, and those hoping to see it through are chasing him to the ends of the Earth.

Things move closer to home when CIA intelligence discovers that Iran has dispatched Mahmoud Abu Javari, the notorious IED bomb maker to the U.S. Biff now faces a Homeland threat of 9/11 proportions and has to thwart a bomb plot in San Francisco without knowing the target or timing for the planned act of terror.

I enjoyed the character of Biff Roberts. He carried the persona of a man who was not easily fooled or gave in. The type of person that I would want and hope to expect to encounter as the Director of Counter Terrorism. For a military thriller that is more in the present times, this is a good read. I have been reading stories in the past. It is always nice to get back into the present even once in a while. With all of the acts of terrorism happening in the world, we don't know what else groups like the Taliban or the fanatical Muslims or even ISIS for that fact are planning on the US. That is why stories like this book make for interesting reading. Yet, I found myself not fully committing or connecting to the story as a whole. Therefore, I found it hard at times to stay focused on what I was reading, despite all of Biff's efforts to try and keep me engaged. While, this may not have been a favorite read of mine it was still a good read. I would check out the first book in this series.
R. Lawson