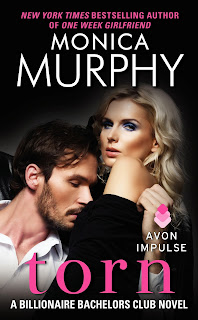 "Tell me your name."

A shiver runs down my spine at the

commanding, deep voice that sounds in my ear. I keep myself still, trying my

best not to react considering we’re surrounded by at least a hundred people,

If I could, I’d throw myself into the arms

of the man who’s standing far too close to me.

He’s demanding to know my name as if I owe him some sort of favor, which

I can’t help but find hot.

"Tell me yours first," I murmur in return,

turning my head in the opposite direction, so it appears I’m not even talking

to him. He stands behind me, tall and broad, imposing in his immaculate black

moment, but I’d memorized everything about him the moment I first saw him not

an hour ago. He’d drawn plenty of attention without saying a word, striding

into the room as if he owned it, casting that calculating gaze upon everyone in

attendance. Looking very much like the mighty king observing his lowly

subjects—until his eyes lit upon me.

He watched me for long, agonizing minutes.

body, and for a terrifying moment I wondered if he could see right through me.

I shifted the slightest bit, inwardly cursing myself for coming tonight, but I

held firm. I refused to react.

I still refuse to react.

amused at the notion, and I’m tempted to walk away without a word. My earlier

nerves evaporate, replaced by a steely spine and an even steelier attitude.

He’s so confident, so arrogant, I’m sure he believes he has me.

He doesn’t know who he’s dealing with

We’re at a local wine- and

brewery-tasting, and I’m here representing the bakery my family owns. The one I

was recently allowed to take over and run since I’d graduated college. The

business they all believe is going to fail. So

why not give it to Marina? She can’t screw it up too badly.

That’s what I overheard my father telling

my uncle. The memory of his words still cuts straight to the bone.

Finally I chance a glance at the man

behind me, drinking in his thick brown hair tinged with gold, the way it

tumbles across his forehead, his twinkling green eyes, the faint smile that

curves his full lips. The combination gives him a boyish appearance. It’s a

"Perhaps you can enlighten me." I offer a

carefree smile and turn to face him, the nerves returning tenfold when he takes

a step toward me, invading my personal space. His scent hits me first: clean

cologne that I can detect.

Rather unusual. Most of the men I know

women in. Instead, they end up choking us.

With the exception of this man. I find the

He’s not very subtle. And he’s exactly who

I suspected, not that I had any real doubt. The very man who recently bought up

what feels like half of the Napa Valley, all in the hopes of turning it around

and selling it to God knows who just to earn a hefty profit.

Not caring in the least that he’s forever

changing the landscape of the very place I’ve grown up in. And devastating my

family in the process.

breathless, and I want to smack myself. I’m not here tonight because of him. I

came for other reasons. To promote the family bakery, to mix and mingle with

local business owners, many I consider friends. My life in the Napa Valley is

And this gorgeous man standing in front of

me is trying to take what I know away from me for good. 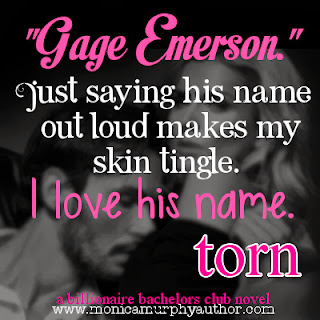 ABOUT TORN (Book 2 in the Billionaire Bachelors Club Series):

Marina Knight came to this party for one thing only: to slap Gage

Emerson in the face. Poised to snatch up her family's real estate empire, the

melt with a single kiss …

his latest acquisition, claiming her as his suddenly doesn't seem quite so

cut-and-dried. To get what he wants, he must get to know the fierce woman

willing to face him down—as she steadily steals his heart.

to protect her family. As they delve deeper into an affair they didn't see

coming, Marina's torn: Will she lose her heart to Gage—or everything she holds 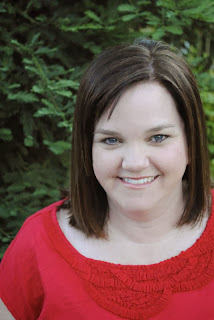 native Californian who lives in the foothills below Yosemite. A wife and mother

of three, she writes New Adult and contemporary romance for Bantam and Avon.

She is the author of One Week Girlfriend and Second Chance Boyfriend.