Mayhem is a creepy, good read that is not to be missed! 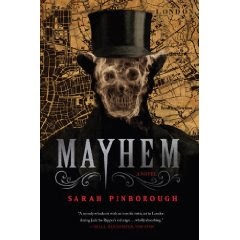 Someone is killing women and leaving their body parts. All except for the heads. Dr. Bond can not sleep from all the imagines of the murders. So he turns to opium. He then roams the streets at night. There is evil lurking in the dark of the night.

To be honest, it was not Jack the Ripper that drew my attention to this book and made me want to read it. It was the description of the Torso Killer that got me. I am a junkie for a good, well-written gory murder/serial killer story. You would not imagine how hard it really is now a days to find a book like this.

This book is not that gory. Well not by my standards anyways. When I think of gory I think of Chelsea Cain and Gretchen. She is one sick, twisted woman. There are not a lot of details spent on the murders as far as when the victims were alive before they were chopped up into pieces and tossed out like left over meat. Luckily, what this book lacked in the gore factor it made up for in the world and the characters. The opium filled world that the doctor spent his time in was creepy and intriguing at the same time. The supernatural elements played nicely with the killings. Would have liked to have seen Jack and the Torso Killer interact. Mayhem is a creepy, good read that is not to be missed!
Sarah Pinborough