Watch out as he will cut your heart out! 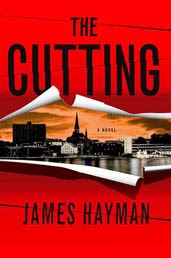 Detective Sergeant Michael McCabe is trying to get settled with his new life in Portland, Maine with his daughter. Detective McCabe has barely been in town and already he is on a hot case. There is a serial killer on the loose. Two women have already gone missing. One has been found with her heart cut out. This is not just any serial killer. This killer kills with precision of a surgical hand.

It is up to Detective McCabe and his partner, Maggie Savage to bring down the killer before the body count gets too high.

The Cutting is author, James Hayman’s first novel. The first few pages of this book really grabbed my attention. Detective McCabe seemed like a pretty straight arrow. It was nice to see that he was human and had to deal with family issues amongst trying to stop a serial killer. For me the wished the serial killer was more prominent in this story. When the story line would flash to the serial killer the parts were too short. I wanted more. Also, there were a few times in the middle where I would lose some interest but than the story line would pick up speed again and I would jump right back into this book. Overall, this book did leave me willing to check out his next novel.
James Hayman

Luanne said…
Always on the lookout for new thriller authors. Thanks for the review.
March 9, 2010 at 7:07 AM