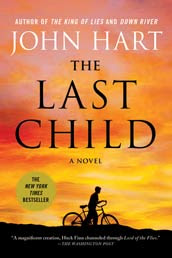 Johnny Merrimon was born a twin. Unfortunately, Johnny only got to know his sister, Alyssa for thirteen years. His father forgot to pick his sister up after work. That was the last time anyone ever saw her again. His mother blamed his father to the point that he left them.

Johnny can’t state his mother’s depression. Johnny decides to set out and check every neighbor from here to there. He won’t rest till he finds his sister.

Detective Clyde Hunt can’t forgive himself. Though, everyone has told him that he did everything he could to locate Alyssa, he still believes he could have done more. Detective Hunt’s guilt has him keeping a watchful eye over Johnny. He doesn’t want anything to happen to him. Sorrow will forge a friendship and bond between Detective Hunt and Johnny.

Mr. Hart has struck gold with The Last Child. He really brought this book to life. The characters jumped off the pages. The dynamics shared between Johnny and Detective Hunt was very moving. Johnny won my heart. He was more mature than the adults. The love that Johnny had for his sister war sweet and very brotherly. Even through adversity Johnny showed determination. I kept cheering for Johnny. The picture as well as hardship Johnny experienced, I did too. I literally had a hard time putting this book down. Every time I would, I would have to rush back and pick it back up. I finished this book in one day. The Last Child is a must read!