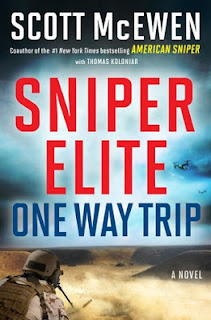 Warrant Officer Sandra Brux is a pilot. Her transportation is a UH-60M Black Hawk helicopter. She and her co-pilot are taking a smoke break when they are fired upon. Sandra tries to get the helicopter in the air but the tail end is hit and the copter goes down. Sandra is captured.


Navy Master Chief Gil Shannon hears about Sandra’s capture. He forms a rescue team of SEALs and Delta Force fighters. There will be no prisoners and only the strongest will survive.

If you can not handle brutal violence then you should probably not read this book. Also be warned as there is language featured in this book. But hey if you picked up this book to read it then you need to deal with the language. This is war and there are no nice guys in war.

There was a good cast of characters. Well everyone but the president. I understand there is a fine line when it comes to politics and playing the game but in this case the president seemed to be one of the bad guys and acted like a little kid. Don’t know if this was intentional. What I mean by this is that the president was like I told people not to disobey my orders and they did. I am sorry but I feel the same way Gil did in this book. Even if you have to disobey orders, if you can save someone it is worth trying.

Sniper Elite is one of the best military themed books I have read in a while. Mr. McEwen brings the firepower with this book. Sniper Elite shots and hits it’s target!
Scott McEwen Thomas Koloniar