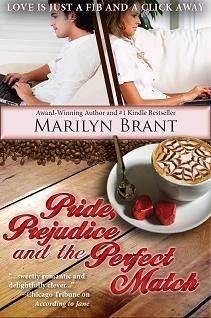 Would an Elizabeth Bennet by any other name be as appealing to a Darcy?


A single mother and an ER doctor meet on an Internet dating site—each for reasons that have little to do with finding their perfect match—in this modern, Austen-inspired story. It’s a tribute to the power of both “pride” and “prejudice” in bringing two people romantically together, despite their mutual insistence that they should stay apart…

Beth Ann Bennet isn’t looking for love. She’s an aspiring social worker using an online alias to study sex-role stereotypes. Dr. William Darcy isn’t looking for love either. He’s just trying to fund his new clinic by winning a major bet. Both think Lady Catherine’s Love Match Website will help them get what they want—fast, easy and without endangering their hearts. Both are in for a big surprise.

Pride, Prejudice and the Perfect Match…where true love is just a fib and a click away.

She set down her pen. She was armed and ready for today’s coffee “date” and planned to find as much direct, supporting evidence as she could for each point in the few minutes she and Will would spend together. She hoped she could pull this off.

Somehow she managed to get Charlie to kindergarten, do a morning’s worth of work at the agency and arrive at the Koffee Haus right on time.

The scent of warm, roasted coffee beans enticed her nostrils even before she made it through the doorway. The singles’ bar of this century had cinnamon shakers and skim milk pitchers on the counter instead of vodka jiggers and salty peanuts, but the idea was unchanged.

A pair of lanky guys leaned against the counter waiting for their orders to be ready. Neither of them looked anything like Will’s website photograph. Where was he?

A small table opened up near the door and Beth leaped for it. She slid into the chair and began casing the room. Mostly couples or small groups of friends. A dark-haired man in his early thirties sat alone with a newspaper. His back was to her so she leaned to the left to try to catch a glimpse of his face. It could be him. Might be.

She leaned a little further but before she could see him she felt that roller-coaster dip in her stomach and lost her balance—hands swiping the floor, chair scraping awkwardly. Very smooth move.

The guy turned to stare at her. So did everyone else. She readjusted herself and tried to bury her head in her purse. That looked like him. Close enough to the photo anyway to make her pretty sure. He had to think she was a klutz.

When she looked up, he was staring at her again. An assessing glance. Yep. The game was over before it had a chance to begin. Something about him struck her as odd, though. His email personality was so warm, so charming. This guy—well, arrogant seemed to be a better descriptor.

She wondered what he’d do now. Ditch her? She grabbed her stereotypes list from her purse, scanning it covertly in case he worked up the nerve to come over before she approached him. A glimpse at her watch told her it was already ten minutes past one. When she looked back at his table, he was gone.

She sighed. Not good. Her final project was due in a few weeks, and she needed to cite concrete examples of Case Study #1’s behavior, documented and dated over a period of thirty days. She didn’t have time to start again with a new subject...and Charlie’s future was at stake. She stood to go.

“So, are you the woman Lady Catherine thinks I’m destined for?” a deep voice with a laugh hidden in it whispered in her ear. She swiveled around and stared at the man behind her. He wasn’t the guy with the paper, but he, too, looked like Will's photo. Only better.