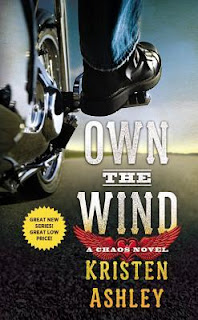 Tabitha “Tabby” Allen is the daughter of Tack. Tack is the leader of the Chaos, a motorcycle gang. Everyone knew to not mess with Tack’s daughter. Shy is a member of the Chaos. It was his turn to go rescue Tabby from her rebellious teenage ways before her father found out. Shy was just trying to teach Tabby a lesson.


That was a long time ago. Now Tabby is all grown up and engaged. Life has a funny way of laughing at us. Tabby’s fiancé is killed in a car accident. Tabby returns home and it is not long before Tabby and Shy are together.

I had really high hopes for this book. The cover was good and I was looking forward to some really yummy guy candy. Well sadly this book missed the mark for me. I got about half way and gave up. I tried to jump back into the book after walking away from it for a while but I just could not get back on the bike for another long ride.

I was over Shy and Tabby after the long Prologue. However I stuck with them hoping that things would pick up but they never really did for me. I found Shy first to be mean when he was teaching Tabby a hard lesson and then kind of annoying and full of himself that he knew that he could get Tabby again after the death of her fiancé. I admit that Tabby probably would have either called off the wedding or been unhappy if her fiancé had lived, however I did not care for the way that Shy came off during it all.

Also, I was rooting for Tabby. I thought she was going to be this kick-ass chick as her father is the leader of a tough motorcycle gang. Tabby is as tough as her name.