A Diet to Die for is a ridiculously, entertaining, not to be missed, good read! 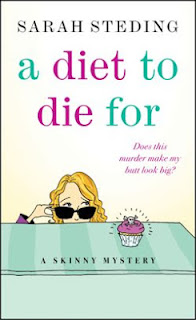 Jen is an event planner. She is currently coordinating a party of celebrity baker, Bess Brantwood. The party is going well until someone yells that Bess is dead. Yup Bess is as dead as a door nail. There is just one question…”Who killed Bess and why?”


Jen finds herself on the case along with her two friends. It is not all bad as one of the police officer’s on the case is named Alex. He is a hunk.

I knew from the book cover and the comment on the front saying “Does this murder make my butt look big?” that this book was going to be a fun one to read. However I was in for a really yummy treat.

Jen and her friends are a hoot. They are so much fun to hang out with. Um hello, Elizabeth. Yeah it is a good thing that I like to work out or I would probably feel the same way as Jen does about Elizabeth. Although, I have to admit that anyone who can make someone else look like they are thin in workout clothing is a goddess.

The romance building between Jen and sexy detective Alex is a good one. Things are going to be interesting between these two. A Diet to Die for is a ridiculously, entertaining, not to be missed, good read!

About the Author: Sarah Steding has cut carbs, calories, white foods, yellow foods, packaged foods, and fatty foods (not all at the same time, or any for more than a few well-intentioned days). She's tried grapefruit, cayenne-spiced lemonade, macrobiotics, and even gummy bears. While crusading against thunder thighs, she has developed quite a sense of humor about the whole ordeal. She lives in Brooklyn, NY, with three little boys and a husband who has learned to say she looks quite slender in those jeans.


Place a large mixing bowl into the frig a half an hour before beginning your recipe. Place cold water in a medium bowl. Sprinkle in the envelope unflavored gelatin. Add the boiling water and stir until all of the gelatin is dissolved.

Take the bowl that has been chilled out of the frig. Combine the sugar substitute, cocoa powder, salt, cream, and the almond and vanilla extract. Use a mixer on medium speed to beat the mixture until still peaks form. Beat in the gelatin mixture.

Serve in parfait glasses with a dollop of whipped cream and a dusting of cocoa powder.