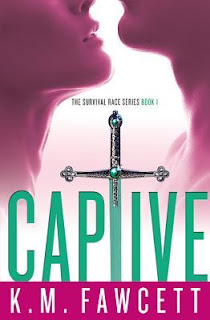 Officer Addy Dawson is out in the forest rescuing some teenage boys. They did not heed the warnings about the wildfires. As Addy is driving away with the boys, she sees a guy wounded running away. She gets out of the car and walks in the direction that she saw the guy. The next thing Addy knows she hears the car driving off. She is stranded. The wildfire is fast approaching. Addy almost loses her life when she sees some bright lights.

Addy awakes to find herself in bed naked. To make matters worse, she is not alone in bed. Lying next to her is a very naked man.

Max was taken fifteen years ago by the hyboreans. Their goal is to take humans to produce babies. All Max is is a raging beast. However when he meets Addy he wants to control the beast. Together they will have to learn to trust each other if they want any chance of gaining their freedom again.

One of my favorite lines in this book was when Addy had just woken up from being rescued to find herself in bed next to a very naked man. Addy’s three rules about sex are: It is never casual, never used as a weapon and never, ever given as a thank-you gift. That’s what fruit baskets were for.

I am not usually a fan of the alien themed books but with this book I was loving every moment of this book. This is because Addy and Max were good together. Addy is fierce and Max is the bad boy with the heart of gold and the body of a warrior. Together they were hot. While there are many steamy moments between Addy and Max this book also has a nice storyline and plenty of action. Addy and Max find themselves running around in this book. I like the world that they were in. If you are also a first time reader of alien themed books or just looking for something good to read then you should pick up a copy of Captive today.
K.M. Fawcett