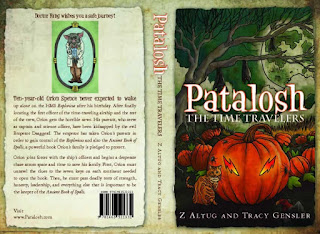 Ten-year-old Orion Spence never expected to wake up alone on the HMS Exploricus after his birthday. After finally locating the first officer of the time-traveling airship and the rest of the crew, Orion gets the horrible news. His parents, who serve as captain and science officer, have been kidnapped by the evil Emperor Daaggerd. The emperor has taken Orion's parents in order to get control of the Exploricus and also the Ancient Book of Spells, a powerful book Orion's family is pledged to protect.

Orion joins forces with the ship's officers and begins a desperate chase across space and time to save his family. First, Orion must unravel the clues to the seven keys on each continent needed to open the book. Then, he must pass deadly tests of strength, honesty, leadership, and everything else that is important to be the keeper of the Ancient Book of Spells.

Patalosh is a great book!nThe story is about ten-year-old Orion, a time-traveler who is in desperatensearch of seven keys to unlock the all-powerful "Book of spells".

Evil Emperor Daaggerd captured his enemies, Orion's parents, and taken them captive. Until Orion can complete the riddles, pass the tests of honor, responsibility, and other necessary traits to be the keeper of the sacred book, his parents will be stuck with Daaggerd.

The seven keys Orion is looking for come from the seven continents on Earth (except Patalosh). Along the way, Orion meets lots of new friends!

This book, Patalosh is a book that I will read over and over. The authors put in descriptive sentences, and I could picture everything in my head. The book teaches the reader many things, but it is way cooler because it's nothing like school.