The Last of the Demon Slayers

Lizzie Brown would just like to have one normal date. Instead she gets a towering inferno with a message: her long-lost dad is a fallen angel in danger of becoming a demon. Not good. Especially since she's a demon slayer. Her grandma advises her to stay out of it. Her sexy-as-sin shape-shifter boyfriend would much rather she devote her attention to more carnal pursuits. And her dog's one demand is for more bacon. After all he can't train his pet dragon on an empty stomach.


But Lizzie knows there's no other choice but to hop on her Harley and help her father-even the search for the truth brings a bad-boy slayer back into her life and leads her into the middle of a war to end all wars.

Buy it at Amazon

Bestselling crime novelist, Cassie Alvarez, aka Cassie Lang, had murder on her mind when she walked into Rory's Bar under dressed and under cover to research her latest crime novel. Researching the cool, blue-eyed and dashingly handsome man at the end of the bar stirred her senses more than she wanted to admit. But was this man of leather armor all he appeared to be?


Playing White Knight to an innocent wasn't how Detective Jake Santos planned to spend his time under cover. But there was no way "CJ" was what she claimed to be and that nagging tightness in Jake's chest told him he'd better take her home to safety and leave it at that. Then the barroom exploded with gunfire, leaving a trail of dead that includes a notorious Providence crime boss and an undercover FBI agent. When Cassie's name is leaked to the media as the only witness to the grisly murders, Cassie insists she only trusts Jake to protect her.

The FBI wants their star witness happy and will do anything to make sure Cassie testifies. But it is clear to Jake that the shooter isn't the only person who wants Cassie dead. Not knowing who to trust, he vows to protect Cassie at all cost despite the fact that guarding the beautiful novelist is a serious distraction.

MATERIAL WITNESS is the follow-up Romantic Suspense Novel by Lisa Mondello's Yuletide Protector and is book 1 of her new Heroes of Providence series.


Buy it at Amazon 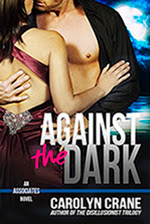 Give a brief description of the story.

SHE'S AN EX-SAFECRACKER FORCED INTO ONE LAST HEIST

Angel Ramirez left the safecracking game five years ago, and she's worked hard to make amends and build an honest life. But when a beloved aunt is kidnapped, she must reunite with her girl gang to acquire the unique ransom: Walter Borgola's prized diamonds. It's a simple job that turns into a nightmare, thanks to a surprisingly clever-and searingly sexy-security guard named Cole Hawkins.

HE'S AN UNDERCOVER AGENT WITH BIG PLANS FOR HIS GORGEOUS THIEF

Cole is one of the Association's most brilliant agents, under deep cover investigating a ruthless killer. He's also running out of time: hundreds will die if he doesn't stop the plan Borgola's set into motion. Catching Angel is the break he needed--he promises not to turn her in if she poses as his lover and uses her unique talents to unlock the sociopath's dungeon vaults.


But as pretend passions turn real, Cole regrets drawing Angel into his deadly game...and danger is closer than either of them could ever imagine.


What did you think the author did particularly well?


The tension in this book was just awesome-from the opening scene where they're stealing millions of dollars in diamonds to the first sizzle between Cole and Angel. There isn't a slow moment in the whole book.


What was your favorite thing about the story?

The sex scenes were pretty smokin'! I also loved that the villain in this book was one of the creepiest I've read in a long time. I mean he was super creepy.


Buy it at Amazon

Buy it at Kobo