Amanda made me more excited about sirens with this series. 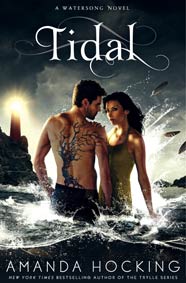 After being rescued by her sister, Harper and her boyfriend, Daniel, Gemma is back with her family. Unfortunately the sirens, Penn, Lexi, and Thea have followed Gemma back to her home town. They are in no hurry either to leave.

It seems that Penn has her eyes on Daniel. Also, she is on the look out for Gemma’s replacement. Once she finds her than Gemma is history. That is until Gemma and Harper can find a way to stop the girls without killing Gemma herself.

Tidal is the third book in the Watersong series. Amanda made me more excited about sirens with this series. However I have to say that I was a little disappointed by this book. I expected there to be more action and for Penn to be her annoying her. She was in a way still annoying but only about a third of the way. Other wise she was more subtle in this book. In fact all three of the sirens were pretty docile. Even Gemma did not act out as she is learning to embrace her siren side.

What I did like however was getting to know the sirens and their past better. Who they were before and in more detail how they became sirens. Still I enjoyed reading this book. I flew right through it, so it is a fast read. I hope that the next book, Elegy has lots more action that includes a big battle scene.
Amanda Hocking