WHERE THE LIGHT FALLS 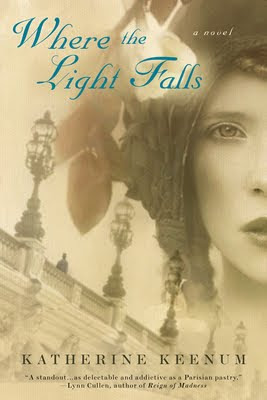 Jeanette has been expelled from Vassar College. Jeanette is already to head back home in disgrace until a teacher at the college encourages Jeanette to go to Paris to pursue her painting. She has talent.


Edward fought in the American Civil War. He is now out of the war but fighting a new war. A war with his body. To help with the pain, Edward uses laudanum. He becomes addicted to it. Edward’s friends feel a new location will help Edward, so he is asked to accompany a friend to Europe.

It is in Paris that Edward meets Jeanette. They start out as good friends but as time progresses, their relationship grows into more.

What I enjoy most about books is that they can transport me all over the world and different time periods. Thus part of the reason why I chose to check out this book. Another reason is that it sounded really good. I am not going to say that this book was not good as it was. It read like a poem or one of Jeanette’s painting…flowing and picturesque. However as much as I enjoyed this aspect of the book, I could not get past the fact that I did feel like this book was too long. It seemed that even the author thought so too as much would flash forward chunks of time.

In addition, that there were many different secondary characters that were introduced into this story that at times it was hard to keep them straight and their stories. Lastly, I was expecting this to be a romance book but the romance was there but barely. It was not love at first sight between Edward and Jeanette. Jeanette was busy with her painting and Edward with his addiction to laudanum. Overall, this was a nice introduction to a new author. Where the Light Falls is an enchanting read!