The First and Second Rules of Ten 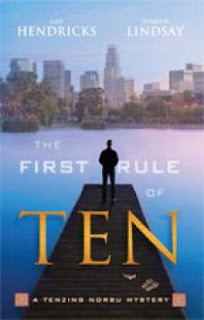 Tenzing “Ten” Norbu is a Buddhist and newly appointed private investigator. This first client is a woman named Barbara Maxey. She asks ten to give her ex, Zimmy Backus a warning. That he might be in trouble. Ten does not really take Barbara too seriously. That is until she turns up in the morgue dead as a doornail.


I liked the idea of the character Ten. I like that he was a Buddhist private investigator. I have not come across a character like this before. So my interest was piqued. Unfortunately for me this book missed the mark. I found that Ten’s downfall was his Buddhist background. He never let himself react to anything too seriously. Like for example when he broke his first rule and it was early in the book that he broke it, he just commented that he broke his first rule. Never overreacted. Also, I thought that monks were taught discipline so that they had more patience and could hold out longer. So why did Ten break his first rule so quickly? Of course, I am no expert on this subject matter.

So what Ten’s reactions to everything, this book seemed mild. Even though the rest of the characters used some cuss words and the action was a good murder set up. Also, I felt that the story moved slowly. The action was not the type to be in your face. I had to skim lots of parts as if to press fast forward. The ending was nice and tidy. There were no loose ends left. The pairing of Mr. Hendricks and Ms. Lindsay was a good one. I could not tell where one stopped and the other one picked up. 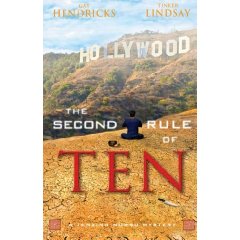 Ten has been hired by big time movie producer, Marv Rudolph. Marv is having problems with his daughter. He wants Ten to find her and bring her back…again. Ten finds her about to shack up with one of the actors in Marv’s latest movie. Marv and the actor have a confrontation. The next morning, Ten gets a call form his friend, Bill. Marv has been found murdered.


Since I did not care for the first book, I had my reservations about wanting to even attempt reading the second book. Well I can say that the second book is much better then the first. Ten has really toughened up and has a little bit of a sarcastic attitude about him that I liked. Also, I got into this storyline more as well. It moved faster as if the two authors had started to find their stride with each other and this series.

Ten did not have the first time jitters anymore. He was a man on a mission. His relationship with his friend, Bill is a work in progress but a good one. They work well off each other. A star in his own right in this book is Ten’s cat, Tank. I like that Ten talks for him as if Tank really does have a voice. I have for years known that animals can speak even if it is just telepathically.

In this book, I also felt that I got a better understanding as to who Ten is and where he comes from. I hope that he and his father can repair their relationship. If the books get better like this one then the third one is sure to be good.