Learning to Stay is a must read book. 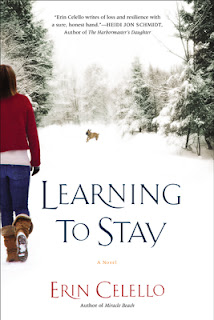 Elise’s husband, Brad is in the military. Elise receives word that Brad’s unit has been attacked. Brad survived and is coming home. Once Brad arrives home, Elise quickly learns that the man she knows and loves is not the same man that has returned home. Elise is trying to adjust to the “new” Brad but Elise is having reservations. That is until Brad goes back home and meets a dog named Jones.


I eyeballed this book and thought it sounded interesting and one that I needed to check out. Well I am so glad that I did. I absolutely loved this book. Learning to Stay is a must read book. This book will help keep you warm during these cold, winter months. This book will tug at your heart strings.

I felt sorry for Brad for what he had to go through when he came back just dealing with the real world again and trying to live a normal life. In addition, to the harshness of Elise. Although, I can’t really put blame on Elise. Having Brad come back a changed man like he did was a huge adjustment for her. One that I did think she handled well. She did stick with him in the end. If I was in Elise’s position I think I might have reacted the same way as her.

The only problem that I had with this book was Jones was not featured enough. I would have liked to have gotten to know Jones better. I do like that she was the one that helped Brad in the end to be able to live again. PAWS is a great group. I have not worked with them but I did raise a guide dog for the blind. So you could say that dogs that are trained to help people in need is very near and dear to my heart.