Three Graves Full will have you hooked for a thrilling ride! 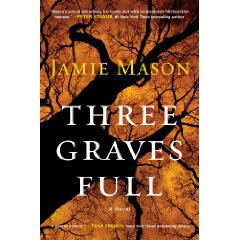 Jason Getty still has nightmares about the crime he committed. He murdered a man and buried him on his property. For this reason, Jason has let his property get overgrown. He knows he has to do something soon or the neighbors will complain. So Jason hires a crew to fix up his yard


Jason is relaxing until the crew calls for Jason. They have dug up a body. Jason knows the end is now for him. That is until Jason learns that it is not his body but another body and it is two bodies not one. Whose bodies are they and what are they doing on Jason’s property?

Wow. If this is what a debut novel is like from new author, Jamie Mason, then I can not wait to see what her next novel will be like. This book was way more then just a suspense/mystery novel. It had great depth and a good psychological aspect to it. The first third of the book was the mystery and then the story quickly picked up to and turned into a psychological thriller. This is where I admit that I did get a bit confused trying to keep everything straight. Luckily I got back on track fairly quickly. However as the story played out, I was wondering if Jason was really as bad as I first thought he was. When the end happened and the story was revealed I was not surprised by parts of the ending. I knew what was going on but I was still intrigued. Three Graves Full will have you hooked for a thrilling ride!