My Own Personal Soap Opera 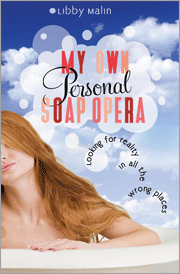 Frankie McNally is the head writer for the soap opera television show, Lust for Life. It is hard to come up with new materials; thus the slippage in ratings. I mean…there are only so many times you can kill someone off before it is old news. Frankie gets the break she was looking for in an unexpected way. A jewel thief is copying the plot from the show in their heists. Some would say this is the greatest form of flattery. Things are sure to get wild when they involve Frankie.

My Own Personal Soap Opera is the second book I have read by Libby Malin. Just like the last book, My Own Personal Soap Opera had some very funny, crazy, kooky moments. My favorite moment had to be at the beginning when Frankie was talking on the phone about offing someone. She kept getting all these strange looks, including one from a police officer. While this book did make me laugh, I wish I could have laughed all throughout the book versus just in several areas of the book. I knew soap operas could be crazy but I didn’t know they could get psycho crazy. Now that is a whole nether level. Frankie’s real life was much more exciting then the television show, Lust for Life. Frankie was the star of the story. The rest of the characters were more secondary. Though, another good read by Libby Malin.
Libby Malin