Eye of the Red Tsar 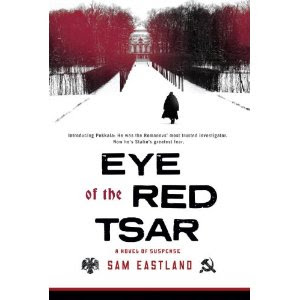 Nicholas Romanov, Tsar of Russia was a very powerful man. With wealth and power comes the danger of people always wanting to kill you.

While training in the military, Pekkala met Romanov. They became friends, formed form their admiration for each other. Due to Pekkala amazing ability to remember things, even down to the smallest of things like how many buttons are on someone’s coat; Romanov brought Pekkala into his closest circle. Pekkala became known as “The Red Eye of the Tsar.

In 1917, Romanov and his family were murdered. Pekkala was charged and sent away. He would be forgotten and only known as prisoner 4745-P. Flash forward to the present. Pekkala’s help is needed.

Eye of the Red Tsar is the debut novel by Sam Eastland. This book really surprised me in a good way. I could not tear myself away from this book .Pekkala is the next Jason Bourne. This book started out with a bang and ended on a high note. I found all of the characters intriguing and memorizing. The storyline would flash back and forth between the past and present. It was so effortless. I found that every time the story would go back to the past, it would add that much more depth and intensity to the plot. Pekkala is both a great detective and assassin. I can’t wait to read the next Pekkala novel. Anyone who likes to read a good book needs to check out Eye of the Red Tsar!
Sam Eastland

Anonymous said…
Typo! The Romanovs were murdered in 1918.

I loved Eye of the Red Tsar, too. Pekkala is a very interesting character, and I can't wait for the next book (2011, woo-hoo)!

I wrote a review of it on my blog, if you're interested: http://bit.ly/dnPd9d Make sure you check out discussion topics I've been posting, too!

I just finished this book, it I thought it was very good.