I am Flipping Out 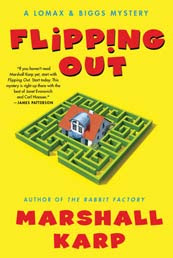 Terry Biggs and four other of his fellow detectives were out on Reggie Drabyak’s fishing boat. They were enjoying a guys day out. This would be the last time any of the guys would be spending together, just having fun for a while.

The next day, Terry and his partner were heading into the station. Their boss was waiting for them. Reggie Drabyak’s wife, Jo was murdered. Why would anyone want to murder sweet Jo? Jo worked as an events planner. Things start to get stranger, when another woman is murdered. There seems to by a connection…one both women were cop’s wives and two; the women were murdered in “flip homes”.

Famous mystery author, Nora Bannister also purchases abandoned homes, renovates them and then turns around and sells them for a profit. This is called flipping homes. It is not uncommon to have someone die in one of Nora’s flip homes. Usually, though the people dying are fictional characters in her books.

Marshall Karp said…
Cheryl -- Thanks for the great review on FLIPPING OUT. Glad I hooked you with the third book and I can't wait to find out how you feel about THE RABBIT FACTORY and BLOODTHIRSTY.

The fourth in the series -- CUT, PASTE, KILL -- will be released June 8. Lomax and Biggs have been optioned by a studio and the series is now in development for television.

I am currently co-authoring a standalone thriller with James Patterson for 2011 release.