Broken Birds: The Story of My Momila 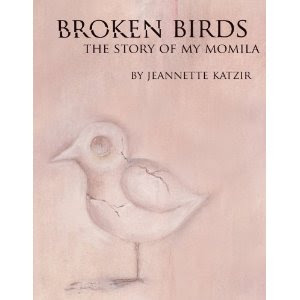 Jaclyn shares the story of her family and how they fought battles against the Nazis and each other.

Jaclyn’s mother, Channa Perschowski was born in a small town in Poland. Jaclyn’s father, Nathan Polczer came from a large family. When Channa was a little girl, she and her family fled from the Nazis. She later traveled to New York with some friends.

On January 29, 1948, Nathan Polctzer became Nathan Poltzer. He boarded a ship for New York. Once in New York, he found that his family didn’t really want him.

Broken Birds: The Story of My Momila is inspired by author, Jeannette Katzir’s own experiences as a Holocaust survivor. I thought that Mrs. Katzir did a good job portraying life back then during World War II and the Holocaust. I always have found a fascination with reading stories in regards to the Holocaust. Some of my favorites were The Hiding Place by Corrie Ten Boom and The Diary of Anne Frank by Anne Frank. I thought that this book fit nicely somewhere in the middle. While I enjoyed reading this book, I only became attached to a few people in this book and they were Channa, Nathan and Jaclyn. Not to say that the rest of the people won’t interesting but I just liked Channa, Nathan and Jaclyn better. So when the story pertained to them, I was more engaged in the story. Which is why at times, it seemed that the story dragged a bit. Overall, though, Broken Birds does fly with emotion and sorrow.
Jeannette Katzir