Book Review: Dancing With The Devil 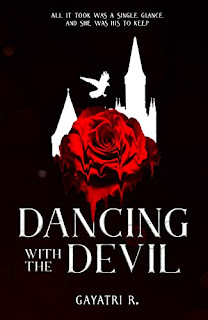 Corvo:They didn’t call me “The Raven” for no reason.I’m known for being ruthless, lethal, and dangerously magnetic. I’m a shadow, the monster pirouetting in the dark. I’m feared yet loved by all, and the entire city surrenders to my name as I rule them with an iron fist.People always look both ways before crossing me.Until Bianca Romano turned my life into a storm with just a single glance.She became mine to keep.My obsession.My beautiful temptation.I broke my rules for her, but that doesn’t mean she can control me.She’s staying, and she wants to play my game.But I’ll show her exactly who’s in control.Bianca :They call him “The Raven.”Legend has it that if you look at him, there’s no going back. But I bent my rules for him, and now I’m his, with no way out.Corvo De La Rossi isn’t the monster he claims to be.Because I know underneath that brutal exterior lies a lot of pain.If he’s the monster, the beast in this fairytale, then I’m the beauty who will put back the broken, lost pieces of him-the one who will tame him.

Dancing with the Devil is so delightfully, dark and delicious! This retelling of Beauty and the Beast will have dark romance readers wanting to pick up a copy of this book for themselves. There is the strong intimate energy between Corvo and Bianca. You can feel the enemies to lovers vibe they were giving off to one another.

As much as I did really enjoy this book. I have to admit that it took me a few chapters to really gel with this book and become fully invested in Bianca and Corvo. However, once I was hooked, I would find myself reading multiple chapters at a time. I will not see Beauty and the Beast in the same way again but for good reason.