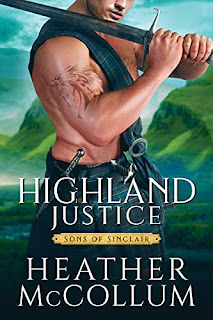 Without mercy, there is no love in this third installment of the Sons of Sinclair historical romance series by award-winning author Heather McCollum.Gideon Sinclair, the third Sinclair brother, judges everything in stark terms of good and evil. There is nothing in between, and he is efficient at passing judgment without mercy. Now that his clan has conquered the warring Mackays, Gideon starts the process of integrating them into the Sinclair Clan. He will sort the people, punish the bad, and better the lives of the good. Judging is as easy to him as breathing, until he meets Cait Mackay, who steals his breath...along with his Sinclair ring.A young widow, Cait Mackay has given her life over to helping the orphaned children in the clan. But love won’t put shoes on their cold feet and food in their stomachs. Cait tired years ago of seeing the rich get richer and the poor suffer more and more, so she decided to do something about it. An agile thief of the rich by night, when she is caught, the new conquering chief must decide her fate.When Gideon realizes that the thief is the same woman who had already captured his attention, he hesitates for the first time in his life. Letting her get away with her deed leads to more trouble when she is accused of stealing from King James and is arrested. Now Gideon must commit his own crime against the Scottish crown if he is to save Cait. But can a man who was raised to honor and uphold justice break the law for the woman who’s stolen his heart?

Each book in the Sons of Sinclair series is STANDALONE:* Highland Conquest* Highland Warrior* Highland Justice

Each book in this series can be read as a standalone book but you will want to read them all. It has been a very long time since I have read a highlander story. After reading this book, my reading appetite has been revived to read more highlander books again. The best part about these types of books it is the witty banter between the two characters.

Gideon and Cait did have some really funny moments between them. Some real zingers. Cait was a good match to Gideon. She could hold her own and go toe to toe with him. I want a Gideon in my life. I mean come on; he broke the bed. He is that strong. Yet, the chemistry Cait and Gideon shared was steamy. If you enjoy reading historical highlander romance books, you will want to pick up a copy of this book.

Sara Strand said…
Same!!! I want all of the highlander books now, I really can't remember when my last one is. I always forget how much I like them until I'm reading one. Thank you for being on this tour! Sara @ TLC Book Tours
May 15, 2022 at 4:14 PM