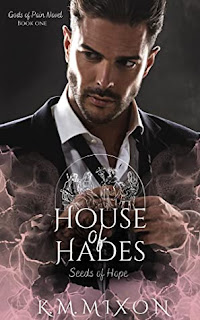 When Hades first laid eyes on the beautiful girl in the fields of wildflowers, he knew he had to have her. Her soul pulled at his inner fiend to steal her away, but he would need help, and he would need to wait until the perfect moment. He knew she was his souls’ mate, but he would have to take what he knew was his. He would drag her to Tartarus to live out her days as his wife, and if she didn’t like it? That would be just fine, Hades was used to taking what he wanted.Persephone had already had the worst day of her life when it ended with the earth swallowing her whole. She had been taken prisoner by a God who could ruin her, just as her mother had been ruined. If Hades thought he would get what he wanted from her he had another thing coming. She would die to hold onto her dignity.As they both fight for control, who will win?Lies, Deceptions, Passions, Love.

All I have to say after reading this book is..."Take me now Hades!" All my smut/dark romance reader friends are going to absolutely LOVE this book. Although, this book needs to come with a warning...Once, you start reading you won't be able to stop until the last word has been read! Now that one of my favorite television shows, Lucifer has ended, I needed a new man to LUST over and that man is now Hades.

Persephone may be human but that does not mean that she can't hold her own in Hell. In fact, there is this one scene where she has power over Hades. So, so hot. Hades helped Persephone to be comfortable with her body and urges. I can't wait to read the next book in this series.