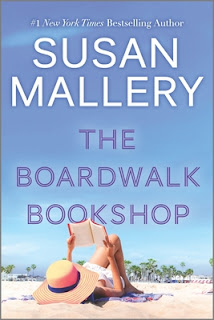 When fate brings three strangers to a charming space for lease on the California coast, the Boardwalk Bookshop is born. Part bookstore, part gift shop, part bakery, it's a dream come true for Bree, Mikki and Ashley. But while their business is thriving, their personal lives are…not.Bree, wounded by brilliant but cold parents and her late husband's ultimate betrayal, has sworn to protect her heart at all costs. Even from Ashley's brother, a writer and adventurer who has inspired millions. He's the first man to see past Bree's barricades to her true self, which terrifies her. Mikki has this divorce thing all figured out—somehow, she's stayed friends with her ex and her in-laws…until a new man changes how everyone looks at her, and how she sees herself. Meanwhile, Ashley discovers that the love of her life never intends to marry. Can she live without being a wife if it means she can have everything else she's ever wanted?At sunset every Friday on the beach in front of the Boardwalk Bookshop, the three friends share a champagne toast. As their bond grows closer, they challenge one another to become the best versions of themselves in this heartachingly beautiful story of friendship, sisterhood and the transformative power of love.

I really enjoyed this book. All of the three women were great together. You would never have guessed that they had started out as strangers as they acted like best friends. Although, I have to say that I was not a fan of Mikki's mother, Rita. She was too much of a critic of Mikki. She was always making jabs at her. Bree had to be the peacemaker for the two of them.

However, I was happy to see Mikki find a romantic connection with Duane. They were good together. Plus, if a guy will stay after being dropped a bombshell on the first date than he is a keeper. The other two women and their romantic relationships were nice as well. I was very connected with all three women and thus the reason that I really enjoyed this book. They all grew and matured even more through the course of the story. Susan Mallery weaves her writing magic again with The Boardwalk Bookshop!