The Measure of the Moon 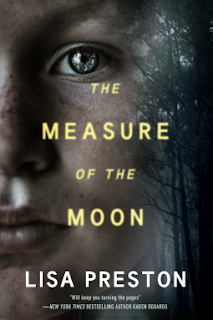 “If you ever say anything to anyone, they all die.”

When eight-year-old Greer Donner falls off his horse in the Washington wilderness, he braces himself to face the long hike home alone. But screams pierce the darkness, and he stumbles upon a dead-end road where a man is beating a woman—nearly to death. In a moment of courage, he stops the assault, but he’s left to face the man, who turns his wrath into an ominous threat: if the boy ever reveals what he has seen, his family will pay the ultimate price. The secret Greer now carries begins his emotional unraveling.

In Seattle, Gillian Trett is a photographer with a troubled marriage and a childhood she’s trying to forget. Domestic tension mounts when her husband’s stepsister arrives. Desperate for a distraction, and a way to advance her career, Gillian throws herself into uncovering the history behind an old man’s Holocaust photo of boys in a forest. The mysterious children and the truth behind the scene haunt her—she can’t let go of the image, or of her own shadowed past.

Then a horrifying revelation entangles Gillian’s path with young Greer’s. The boy and the woman, separated by a generation and a hundred miles, each confront the terrible power of harbored secrets—not only to eclipse the truth but also to illuminate the dark, unknown dimensions of their loved ones and themselves.

Greer showed that he was a very mature eight year old. During the assault, he did some quick thinking, even if it was not such a smart move. Yet, Greer saved a life that night. Ever since than, Greer has been haunted by the man's threats. So much to the point that Greer retreats within himself and we the readers see a transformation within Greer to not be the happy boy he once was. Luckily, for him, he had a good family support system with lots of people who cared for him.

On the other hand, Gillian did not have family support. Not even from her husband. That is why I think that when Gillian found the old photo, she committed to finding out the truth. Than when she met Alexandru Istok, who had saved the children in the photograph from the Nazis. They were Jewish; she was focused on trying to give someone a happy ending.

One of the reader questions for discussion in the back of the book is around Gillian and Greer and what the difference between their situations were like when their is family support. Through Greer's story, it shows that support of any kind either family or close friends, is very important. Without it, the results could be devastating. The author did a good job of bring life to the characters and making me the reader really connect with both Gillian and Greer. Although, the rest of the characters in the story were just as important. Nothing better than a story with well-developed characters and a moving story.
Lisa Preston