I Dared the Duke 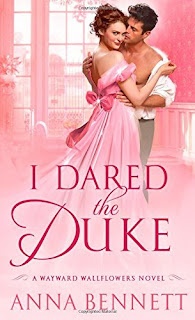 DARE TO FALL IN LOVE

Alexander Savage, the Duke of Blackshire, is known throughout the ton for three things: the burn scars on his neck, his ornery disposition, and the trail of broken hearts behind him. None of which would concern Miss Elizabeth Lacey in the least—if she weren’t living under his roof. As his grandmother’s companion, Beth is all too concerned with the moody and compelling duke. Incensed by his plans to banish the sweet dowager duchess to the country, Beth refuses to do his bidding. If Alex wants her help, he’s going to have to take her dare…and grant her three wishes.

Alex adores his grandmother, which is precisely why she must leave. A string of unfortunate incidents has him worried for the safety of everyone around him—including the dowager’s loyal and lovely companion, Beth. But the notorious wallflower isn’t as meek as she appears, and as their battle of wills heats up, so does Alex’s desire. He’s dangerously close to falling in love with her…and revealing secrets he’d rather keep hidden. How can he convince her that his darkest days are behind him—and that, for the first time in forever, his heart is true?

I have not read the first book in this series. Yet, this book can be read as a stand alone book. I can tell you that Elizabeth is no "wallflower".  In fact, she is ballsy. I liked this factor the most about her. She was not afraid to stand toe to toe with Alexander. I like a woman in charge. Alexander's grandmother had spunk to her as well. Thus the reason that she and Elizabeth hit it off so well. Back to Alexander. While, I did enjoy seeing him get flustered by Elizabeth, I did find that he did not always deserve the tongue lashing he received. He was not a rakish rogue.

The chemistry between Alexander and Elizabeth was charming. There was nothing too hot about it that would light up the night skies with fireworks. Although, I will say that I am glad that these two did not hit it off instantly. Therefore, it made the romance more believable. A nice story overall.
Anna Bennett