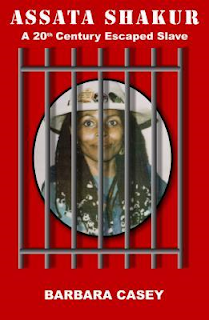 In May 1973, Assata Olugbala Shakur was involved in a shootout on the New Jersey Turnpike in which she was accused of killing New Jersey State Trooper Werner Foerster and assaulting Trooper James Harper. This resulted in her indictment of first-degree murder of Foerster and seven other felonies related to the shootout. A member of the Black Panther Party, she became a prime target of the Federal Bureau of Investigations Counterintelligence Program.

When she joined the Black Liberation Army and went into hiding, between 1973 and 1977, she was placed on the FBIs Most Wanted List for three bank robberies, the kidnapping and murder of two drug dealers, and the attempted murder of two New Jersey police officers. In March 1977 Assata Shakur was convicted of murdering state trooper Werner Forrester and was imprisoned. Two years later she broke out of the maximum-security wing of Clinton Correctional Facility in New Jersey, pistol in hand, as she and three cohorts sped out of the prison grounds. In 1984 she was granted political asylum in Cuba where she has lived ever since. On May 2, 2013, the FBI added her to the Most Wanted Terrorist List, the first woman to be listed. "Assata Shakur: A 20th Century Escaped Slave" is the story of Assata Shakur, before she became a fugitive and since.

To be honest, I had never heard of the name Assata Shakur until this book. Although, to be fair I was not even born until 1982. So, by this time, Assata Shakur was already living in Cuba and a lot of the heat had died down.

I was drawn to this book because I am always intrigued to read people's stories. I got some insight into who Assata Shakur was before she became one of the most sought after women on the FBI's Most Wanted List. The author did a nice job of sharing Assata Shakur story without giving her opinions. She let the readers come to their own conclusions. One bit of information I thought was intriguing was when Assata asked Cubans about their feelings toward blacks or whites that they responded that racism was illegal. In this present day it is sad that people have to deal with racism. This book is a well-written, fast read.

Barbara Casey is the author of several award-winning novels for both adults and young adults, as well as book-length works of nonfiction true crime and numerous articles, poems, and short stories. Her previous nonfiction true crime work, Kathryn Kelly: The Moll behind Machine Gun Kelly, has been optioned for a major film and television series. In addition to her own writing, she is an editorial consultant for independent publishers and writers, and president of the Barbara Casey Agency, established in 1995, representing authors throughout the United States, Great Britain, Canada, and Japan. Barbara lives on a mountain in Georgia with her husband and three dogs who adopted her: Benton, a hound-mix; Fitz, a miniature dachshund; and Gert, a Jack Russel terrier of sorts.

CONNECTING WITH MY SUBJECT

I first became interested in writing about Joanne Chesimard aka Assata Shakur when the United States government began to relax its closed-door policy with Cuba. This meant, among other things, that any and all political refugees who had escaped to Cuba, including Assata Shakur, might now be returned to the United States. In Assata’s case, by returning to the United States she would need to complete her prison term following a conviction of having killed two people, one a New Jersey State Trooper, and various other felonies.


As I researched Assata’s involvement in the Black Panthers and the Black Liberation Movement, the criminal activities leading up to her multiple arrests, the numerous trials and charges brought against Assata, and her despicable behavior during the trials, I found it extremely difficult to write about this woman. There was absolutely nothing about her or her background that I could relate to in order to make her story more compelling. And with all said and done, I found it difficult to disengage from her and objectively write her story. I just didn’t like her.


But then I found a connection. It was information I uncovered about her childhood. About how her maternal grandparents had helped rear her, and during the summers how she would stay with them, helping them in their restaurant at the only black beach resort near Wilmington, North Carolina. The grandparents did everything they could to instill the proper values into this rebellious child. They taught her the importance of making her own way through hard work, and of earning an education by taking her to the library every week and insisting she attend good schools, and how to behave in society. Assata’s Aunt Evelyn did her share by introducing Assata to the finer restaurants in New York City, and taking her to museums and the theater. Ironically, it was Aunt Evelyn who later gave up her own personal goals in order to defend her niece through the various trials and court proceedings. But back when Assata was a child, all of the opportunities were given to her, and I, as a writer, could identify with her on that level.
I was able to write the story of Assata Shakur by presenting the facts and evidence objectively; and by introducing information that has not been presented before. I leave it up to my readers as to whether they like the woman, Assata Shakur, or if they can relate to that little girl sitting in the back of her grandfather’s pickup, reading about the Bobsey Twins.


Thank you, Cheryl, for inviting me to be a guest on your blog site and for your interest in my latest book, Assata Shakur: A 20th Century Escaped Slave.  You might be interested to know that my previous nonfiction work, Kathryn Kelly: The Moll of Machine Gun Kelly, has been optioned for a major film and TV series. I wish you and your bloggers all my best.

MichelleCat said…
To be honest, I have never heard of her either until now. I am do enjoy reading about all aspects of moments in time be them atrocities or for the good. Intrigued to be able to read more.
May 5, 2017 at 8:18 PM

Barbara Casey said…
I hope you get a chance to read my book. It reveals so much about that difficult period in our nation's history, but also the mindset of the people fighting against it--specifically, Assata Shakur. Thank you for commenting.
May 7, 2017 at 1:31 AM