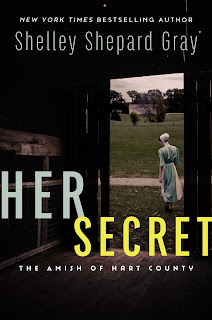 Genre: Amish Fiction
Published by: HarperCollins Publishers
Publication Date: March 14th 2017
Number of Pages: 272
ISBN: 006246910X (ISBN13: 9780062469106)
Series: The Amish of Hart County #1
Purchase Links: Amazon 🔗 | Barnes & Noble 🔗 | Goodreads 🔗
New York Times and USA Today bestselling author Shelley Shepard Gray begins a new series—The Amish of Hart County—with this suspenseful tale of a young Amish woman who is forced to move to a new town to escape a threatening stalker.
After a stalker went too far, Hannah Hilty and her family had no choice but to leave the bustling Amish community where she grew up. Now she’s getting a fresh start in Hart County, Kentucky…if only she wasn’t too scared to take it. Hannah has become afraid to trust anyone—even Isaac, the friendly Amish man who lives next door. She wonders if she'll ever return to the trusting, easy-going woman she once was.
For Isaac Troyer, the beautiful girl he teasingly called “The Recluse” confuses him like no other. When he learns of her past, he knows he's misjudged her. However, he also understands the importance of being grateful for God’s gifts, and wonders if they will ever have anything in common. But as Hannah and Isaac slowly grow closer, they realize that there’s always more to someone than meets the eye.
Just as Hannah is finally settling into her new life, and perhaps finding a new love, more secrets are revealed and tragedy strikes. Now Hannah must decide if she should run again or dare to fight for the future she has found in Hart County.

If you have read books from this author than you know that this is a darker approach to the books readers have enjoyed about the Amish. Although, don't fear as this new side is still ones that readers will enjoy. Another great read from author, Shelley Shepard Gray.

Again, I was able to slip right in and fall in love with the characters and this new location, Hart County. It was nice to see Hannah's family rallying behind her in support of what she was dealing with. Her stalker was someone to be fearful of. Yet, with the love and support of her family, Issac, and God; Hannah was able to find strength. Speaking of Issac, he comes from a good family. His and Hannah's relationship was kind and sweet. I am looking forward to reading the next book in this series.

Excerpt from Her Secret by Shelley Shepard Gray.  Copyright © 2017 by Shelley Shepard Gray. Reproduced with permission from HarperCollins Publishers. All rights reserved.
Author Bio:
Shelley Shepard Gray is a New York Times and USA Today bestselling author, a finalist for the American Christian Fiction Writers prestigious Carol Award, and a two-time HOLT Medallion winner. She lives in southern Ohio, where she writes full-time, bakes too much, and can often be found walking her dachshunds on her town’s bike trail.

​​
This is a rafflecopter giveaway hosted by Partners in Crime Virtual Book Tours for Shelley Shepard Gray and HarperCollins Publishers.
​
There will be 2 winners of one (1) Amazon.com GiftCard. The giveaway begins on
​April 15
th and runs through May 2nd, 2017. This giveaway is for US residents only. Void where prohibited by law.

Sadaqat said…
Hi! I am a newbie blogger too and attached to Travel business Holmsleigh. Found your blog link on social media, I must say you have a very cool blog. Can you please mention theme name I really liked this one. Many Thanks
May 11, 2017 at 2:11 AM