The Girl from Yesterday 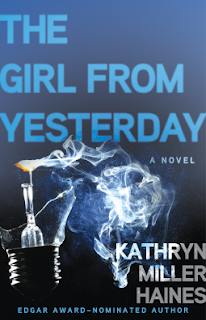 In the fast-paced psychological thriller traditions of Gillian Flynn, Jessica Knoll, and Liane Moriarty, Edgar Award nominated-author Kathryn Haines Miller (The Girl Is Murder) spins an engrossing tale of what might be the worst birthday ever.

Helen’s life is simple. She has a job. She has a boyfriend. She has her weekly NA meetings. No drugs, no drinking, no sex, not even any caffeine—not anymore. Because Helen knows this: once you’re an addict, you’re always an addict. There is no such thing as recovered.

And on her thirtieth birthday, the stability she’s cobbled together for herself will vanish. A call from the police, a body found, a dead woman with Helen’s name in her back pocket—it’s all so hard to believe. But then when Helen finds out the victim was her childhood best friend, a girl who went missing in high school, it’s too much.

Helen knows she has to stick to the routine that keeps her in control, and with the way the police are eyeing her for this, she’s worried about looking suspicious. But the unfortunate reemergence of her old friend—and the mysteries that always surrounded her—means Helen can trust no one, not even herself.

Another book that in my eyes showed promise but I did not see the results. Over the course for several days I read six chapters. I didn't have an issue about Helen. In fact, I like that she was "broken". It made her more human. Yet, I still felt like I didn't really know or even barely scratched the surface of who Helen was and why her childhood friend, who Helen has not seen or heard from in a long time would have her name in her pocket. Due to the fact that there was not a lot happening in the first six chapters, I decided to put the book down. Give me something!
Kathryn Miller Haines