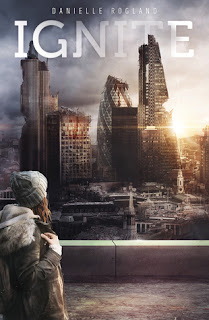 In the ruins of dystopian London, the Empire rules through fear and fire.

“Everyone knew about ‘The Flames’ and how much trouble they had caused the Empire. They were the only rebel group anyone knew of that had lasted longer than a few months without getting caught, leaving candles behind whenever they snatched somebody out of the Empire’s grasp. To get involved with people like them is stupid. So stupid.”

Ever since her parents were murdered by the empire’s agents, Jacks has been living on the street as a pickpocket trying to keep away from trouble. When she accidentally witnesses the rebel group ‘The Flames’ in the middle of an operation she is unwillingly swept up into their world, and has to decide if she’s going to go back to looking after herself or join the rebellion and help them fight for the people of London Ruins.

She knows that getting involved was stupid, but does she really have a choice?


Since Hunger Games, the Maze Runner, and Insurgent to name a few hit the big screens, it seems that more focus has been highlighted on dystopian novels. You have to be careful as most are good but some can be underwhelming. In this case, it was the former. This was a well written novel with strong characters.

Jacks learns that the Flames are made up of five teens...Jeremy, Zira, Addy, Finn, Corry. It is crazy that five teens can and have survived the Empire. Jacks was a nice addition to this group. The group was mainly male driven but Jacks and Addy were strong women.

The first third of the story was fine. It gave me a chance to get to know all of the different characters and the world that the author built. Yet, after that it was pure action with the group coming face to face with the Empire. I was feeling the romance between Jacks and Jeremy. The ending leads readers to believe that we may not see the last of this group.
Danielle Rogland