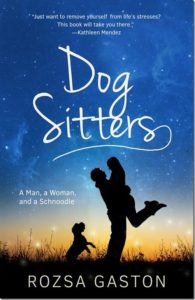 When their friends take a cruise to Bermuda, strangers Hint Daniels and Jack Whitby are charged with looking after their friends’ dog. Then everything starts to go wrong…

In the leafy New York suburb of Bronxville, Hint is supposed to hand Percy off to Jack on day-five of the ten days their friends are away. But at the handoff, the dog ends up running away. Neither is willing to tell their friends the bad news that Percy is missing. Instead, they spend five frantic days desperately searching for the schnoodle, with wildly different ideas on how to go about it. Between Jack’s heavy-handed approach and Hint’s otherworldly style, their personalities clash. Before long they’re bickering furiously, even as romantic sparks fly.

Will Percy show up before his owners do? And what surprising discovery will Hint and Jack make while looking for him?

This was a nice book but I was wanting more. I have read other books that featured dogs and the dogs in the stories were not only a big part of the story but also a star of the story. In this case, Percy was pretty much non-existent through most of the story. This really would not have been an issue as this was the whole point of the story; except, for the fact that I only semi liked the characters. Ok, this is fully true. Hint, I liked, she was nice and full of life and hope. It was easy to see why she was a child illustrator. In Jack's case, first impressions really count. My first impression on meeting him was not good. It took a long time afterwards to warm up to him. The lengths that Hint and Jack went through to find Percy was funny. While, I might not have enjoyed this book as much as I would have liked; there were aspects of this book that I did like. I would try another book from this author.
Rozsa Gaston