A Teeny Bit of Trouble 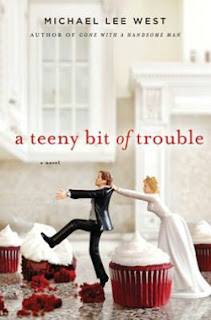 Teeny Templeton suspects that her boyfriend, Coop may be hooking up with his ex. A few weeks ago out of the blue a young girl stops by and tells Coop that he is her father. Teeny decides to go on a spy mission. She puts on her black, wet suit. It is the only black outfit that Teeny owns and she does not want to stick out like a sore thumb.


Teeny gets more than she bargains for, when she witnesses Coop’s ex being murdered. The murderer knows that Teeny saw him or her. Now it is just a matter of time before Teeny is next. Unless, she can solve the murder.

A Teeny Bit of Trouble is the first book I have read by author, Michael Lee West. I understand that it is the second Teeny Templeton book. The first being Gone with a Handsomer Man.

Teeny, while she might not be the brightest light in the bunch, she is sweet and one heck of a cook. I love that she always has a recipe for each situation she encounters. For example: Anything-You-Say-Can-Be-Used-Against-You Quiche, You-Have-the-Right-to-Remain-Silent Salsa, You-Have-the-Right-to-an-Attorney Pita Dippers, Orange-You-Sorry-You-Lied Marinade, and Teeny’s Red Velvet Cake.

What I meant before about Teeny nit being the brightest is that she seems to find herself in the middle of trouble and than it takes some help from friends to figure out how to put the fire out. I was not feeling the love interest with Teeny’s boyfriend, Coop. This might have to do with the fact that I had not read the first book, as I did not really get to witness their relationship in true form. There were moments when Teeny had me laughing at her comments. This book is more of a classic who-dun-it read. I do plan to go back and read the first book.
Michael Lee West