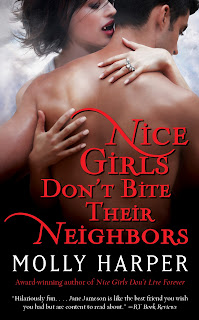 To say that Jane Jameson had a hard time adjusting to being a vampire is an understatement. Aunt Jettie haunts her home (used to be hers), her older sister hates her (always has), her best friend forever’s mom will NOT give up on Zeb and Jane marrying (he’s in love with a werewolf) and then there’s Gabriel…hunk, 150 yr-old vampire who turned Jane as she lay dying (and that’s a great tale in itself!). His frenemy Dick – they were childhood friends – puts anyone thief you can name to shame and her co-worker Andrea was a blood-surrogate.


The fourth installment of the Half-Moon Hollow folk is just a great as the first three. The “Nice Girls Don’t…” series by Molly Harper is a must-read for anyone who likes humor, vampires with a bit of lust thrown in and a great story line. Jane and Gabriel are engaged to marry and are trying to keep control of their event. In a great idea that might should have been thought out first, Jane has turned a high-school jock she used to babysit for who was creamed by a truck and is now responsible for him. For a year. He’s young, horny, doesn’t listen, plays loud music, eats in the middle of the day – a typical teenager that she and Gabriel aren’t exactly prepared for. To top things off, Jane’s Grandma Ruthie has passed away and has decided to haunt the home she “should have always had”. Ruthie and Jettie are about as close as God and Gomorrah and things get hot is a “deadly” way quickly. (Sorry, I couldn’t resist!)

Since it’s always more fun to laugh longer do yourself a favor and get all four books. Yes, you can read only this one and have a good time but – splurge – share with friends and have a great time!