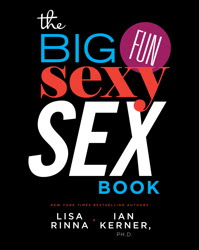 About the book:
• Have flannel pj’s replaced your silky negligees?
• Are you more likely to nod off cuddling the remote—instead of your partner?
• Are you too tired for sex? • Is foreplay becoming “boreplay”?

Sure, being comfortable in your relationship is great. You can finish each other’s sentences, love your partner’s extra ten pounds, and know just the right buttons to push in bed (or at least think you do).

Overflowing with candid advice, tips, techniques, personal revelations, sexercises, and even a ten-step plan guaranteed to rejuvenate your relationship and keep you and your partner coming back for more, THE BIG, FUN, SEXY SEX BOOK proves that knowledge isn’t just power—it’s also pleasure!

From playing Billie Reed on Days of our Lives to heating up Melrose Place as Taylor McBride to earning two Emmy nominations for Best Talk Show host for her show Soap Talk on SOAPnet to being featured on Oprah for her boutique belle gray (one of Oprah's "Celebrity Favorite Places"), Lisa Rinna has made a name for herself as an actress, a TV personality, and a businesswoman. In addition, she recently showed the world that she can not only dance but also look great in anything on Dancing with the Stars, and she launched a line of dance-themed workout DVDs called Lisa Rinna Dance Body Beautiful. She is also the author of the New York Times bestseller Rinnavation. A gorgeous celebrity with a killer sense of style, Lisa lives in Los Angeles with her husband (actor Harry Hamlin) and her two daughters.


Ian Kerner is a nationally-recognized sex therapist and New York Times bestselling author of books including She Comes First, He Comes Next, and Be Honest, You’re Not that into Him Either, amongst others, which have been translated into more than a dozen languages. Known for combining clinical insight with humor and personal warmth, Ian is a regular contributor to NBC’s Today Show and the CBS Early Show, a contributing editor to Cosmopolitan magazine, and CNN’s sex expert (for which his weekly web articles are often the most popular of the day). He is also the founder of GoodinBed.com, a new web destination for sex/relationship advice that brings together some of the world’s most renowned sex experts. Educated at Brandeis University and New York University, he was born and raised in New York City, where he lives with his wife, two sons, and toddler pit bull.


To win a copy of this book, US only. Leave a comment with your email address. Winner chosen April 20th