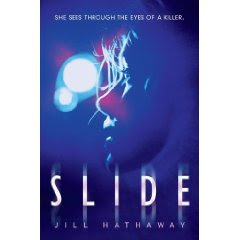 During one of her episodes, Vee slides into one of her sister’s friend’s body. Her friend is murdered and all Vee can do is watch. The police think it was suicide but Vee knows the truth. Only, who is Vee suppose to tell?

I had been eyeballing this book for a little while. I concept of the story sounded intriguing. While, I do agree that the concept was different in a good way, I was let down by this book. Most of the characters were boring and I wanted to see more of Vee’s special talent.

Vee slide into someone else’s body for just a brief moment and than it was over. Kind of like, if you blinked you would miss it. This is the type of book where the characters are important. Due to the fact that I found them boring, I did not care what happened to them, even if it meant they were murdered.

I did finish this book to find out the true identity of the killer. Once I did I was like that is it.
Jill Hathaway