In Search of Mercy 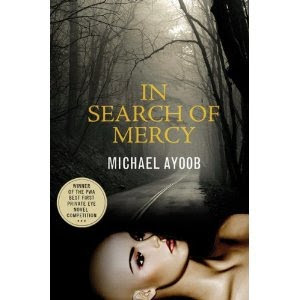 Dexter Bolzjak was used to rowdy crowds. Dexter used to play hockey for the Falcons. His position was goalie. After one really violent game against the Blizzards, Dexter was accosted and tortured.

Years later, Dexter is grown up. Dexter was sitting eating lunch at a fast food joint, when a bum comes walking in. The bum starts causing some trouble when he spots Dexter and walks towards him. Dexter thinks the man is crazy but when the bum hands Dexter a hundred dollar bill and tells him there is more where that came from and to visit him the next day, Dexter can’t resist the temptation.

The bum is not really a bum but Lou Kashon. Lou knows Dexter’s father. Lou wants to hire Dexter to find Mercy Carnahan. Mercy used to be a very famous actress back in the day. Dexter agrees. Dexter is headed down a dark, gritty path, where there is no turning back.

In Search of Mercy is Mr. Ayoob’s first novel. I have to say that after reading this book that Mr. Ayoob has nothing to worry about as his future as a writer is bright. The way Mr. Ayoob portrays mannequins in this book, just may have you quickly getting over your fear of clowns. Dexter is one disturbed individual but this is what I think gives him the edge as a private investigator. The flash back of the torture Dexter endured is horrific. Also, when Mercy would visit Dexter in his images, it was kind of like a weird trip but in a good way. In Search of Mercy is a hard core, dark, suspenseful and filled with a strong storyline and an engaging character in Dexter. Fans of private investigator mysteries will enjoy this new voice.
Michael Ayoob