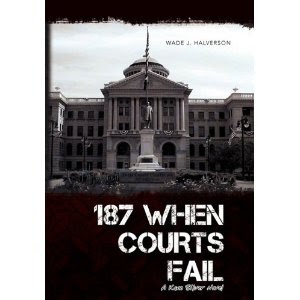 Billionaire John Boyer has the perfect life…a wonderful wife, son and lots and lots of money. John leaves on a business trip only to be called back urgently.

Child pedophile, Felix Flowers is released from prison. The first place Felix goes to right away is John’s home. Sadly, John’s son, Jonathan is murdered at the hands of Felix. Felix is deemed insane and sent away to a mental hospital until he can stand trial. John is sickened by the court systems and hires Kane Silver and his team to help him bring justice.

187 When Courts Fail is the third Kane Silver novel. Kane is like Rambo and the Punisher all rolled into one. So far I have to say that this book is the most violent of the three novels. Though, it is easy to understand why as the subject matter of this book is a hard one to swallow. I was cheering for Kane and his crew for helping to bring justice where it belongs. Be prepared to crave out some time to read this book as you will track of time. 187 When Courts Fail brings a big can of whoop ass with its one, two punch!
Wade J. Halverson