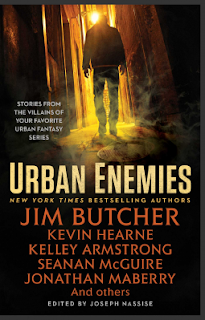 Villains have all the fun—everyone knows that—and this anthology takes you on a wild ride through the dark side! The top villains from seventeen urban fantasy series get their own stories—including the baddies of New York Times bestselling authors Jim Butcher, Kevin Hearne, Kelley Armstrong, Seanan McGuire, and Jonathan Maberry.

For every hero trying to save the world, there’s a villain trying to tear it all down.

In this can’t-miss anthology edited by Joseph Nassise (The Templar Chronicles), you get to plot world domination with the best of the evildoers we love to hate! This outstanding collection brings you stories told from the villains' point of view, imparting a fresh and unique take on the evil masterminds, wicked witches, and infernal personalities that skulk in the pages of today’s most popular series.

I was so excited to read this anthology. While, it has been a while since I have read some of these authors' series, I was happy to see so many of the authors I am familiar with in this anthology. I agree with other readers that the first story Even Hand by Jim Butcher was a let down as it has been produced before. So not a new story. That is kind of the point of an anthology is that readers are exposed to new short stories.

The read the next four stories. They were ok but not one of them except for maybe Sixty-Six Seconds by Craig Schaefer kind of sparked my interest and sort of kept it. In fact, I was disappointed that I did not find the first five stories that great that my interest to read further into this anthology was lost. I might come back to it later and read some of the other stories but for now, I am done. Yet, I will say that I did like the very dark vibes I was getting from the stories. Some stories might just give you nightmares. The view point from the villians' side into of the heroes side was refreshing.