Edge of the Sawtooth 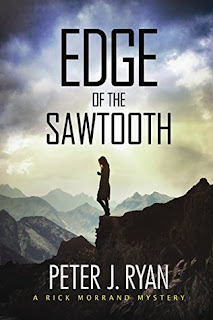 CHLOE MORRAND HAD TURNED HER LIFE AROUND.
She’d been taking her meds. She’d kicked her drug abuse. And she loved her new job at Yellowstone National Park. Life was looking up...

Her father, Rick Morrand—local attorney—is hopeful that Chloe is finally on the right track. But on the morning she fails to show up at his house to pick up her nine-year-old daughter, Abby, alarms ring in his head.

His greatest fear becomes reality when Chloe’s body is found at the base of the Sawtooth in Montana’s rugged backcountry. Authorities assume suicide— for good reason. But Rick doesn’t buy it.

First, former law partner Reiff Metcalf arrives in town to warn Rick about a disgruntled client headed to Montana in search of revenge. Then there’s Draper Townsend, fresh out of prison and eager to settle an old score. Rick also sets his sights on Chloe’s meth-head ex-boyfriend, Chase Rettick, who violently argued with her the day before she disappeared. And he can’t rule out Chloe’s supervisor at Yellowstone, who clearly was more than just her boss.

Local sheriff Caleb Tidwell brushes off Rick’s concerns, but as events unfold in a dark and menacing manner, Rick is certain Chloe was murdered. And it seems as if the murderer is now after him ….
Set in the spectacular backdrop of rural Montana, Edge of the Sawtooth takes us on a gripping journey through the torment of mental illness and addiction, the trials of parenthood, and the anguish of broken relationships and personal loss.

Suspense abounds in this entertaining mystery, which is filled with engaging characters and unexpected twists. Clear your schedule when you read this thriller – once you pick it up, you won’t want to put it down.

This is Mr. Ryan's debut novel. I have to say that Mr. Ryan makes a strong first showing right out the gate. In fact, I am going to give him a nod and say that he reminded me a bit like one of my favorite authors, Mr. C.J. Box. Mr. Box features his Joe Pickett series in Wyoming. Mr. Ryan features his in Montana. Both beautiful areas that lend nicely to the story.

Rick Morrand is the perfect lead for this series. Well I hope it to be a series. It was a fine line that he walked being a father and "detective". Although, I felt that he did a better job of solving his daughter's case then the local sheriff. Speaking of Caleb, he really did not impress me. Yet, I discovered why later in the story.

This story did not lack in suspects. Each had their shady side. Which the author did a very good job of revealing at the right moments. There was no one that I really felt was unnecessary to the overall story. Additionally, no down time. Mr. Ryan writes a smart book. I am already hooked after reading this book and can't wait to see what Mr. Ryan comes out with next. Edge of the Sawtooth is a crisp, smart, mystery that will leave you wanting more!
Peter J. Ryan