A Kiss Before Doomsday 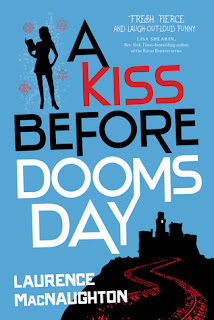 When sorcerers disappear off the streets of Denver, the only person to notice a pattern is Dru, proprietor of The Crystal Connection and newly-minted sorceress. Monstrous creatures are attacking and dragging off anyone with magical powers. Signs point to forbidden necromancy in the hands of someone trying to fulfill the prophecy of the apocalypse scroll.

With the dead rising from the grave, Dru fears someone is picking up where the Harbingers left off half a century ago. Now more than ever, Dru needs half-demon Greyson and his infernal car, Hellbringer. Though Greyson is missing and presumed dead, Dru believes he’s alive—and trapped at the center of this evil.

Dru will need her friends—and her enemies—trusting in Rane’s strength, Opal’s wisdom, and her own crystal magic to infiltrate the mountainous fortress of a powerful sorcerer intent on bringing about doomsday.

Because the moment the prophecy is fulfilled, legions of undead will rise to consume the souls of everyone on Earth.

Yes. A book that actually lives up to the promise of being funny. It was not long into the story before I found myself laughing. Mainly, due to the three women...Dru and her friends, Opal and Rane. Team Rane. Yeah, this series may be centered around Dru but Rane had me from the first moment she appeared. She is brass but her intentions are always kind hearted. She reminded my of the late wrestler, Chyna. Although, as I mentioned previously, Dru and Opal were great as well. Opal is more of the level headed one in the group. Which she finds herself in more sticky situations with Dru then she might like.

As I have not read the first book in this series, I didn't really experience Rane and Salem's past relationship history. Yet, I had a pretty good idea of what happened. Every time that they saw each other, it was not friendly. However, you could feel that they still had feelings for each other. The non friendly banter was like flirting for them or at least Rane. Salem may not have wanted to admit it as much as Rane. Rane and Salem are not the only ones that share a connection. I can't forget about Dru and her boyfriend Greyson. While, they did not spend a lot of time together in this book, I could tell that they shared strong feelings for one another. It was amazing that Dru and her friends did not get themselves killed fighting the undead. Some times it seemed pure luck that they were victorious. I give the women credit as they didn't seem to back down when things got bad. I am going back and reading the first book. This book provided me with many laughs filled with awesome characters!