The Trophy Wives of Alpenrose 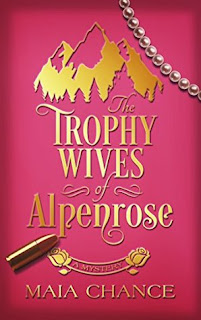 It’s 1965, and small-time American con artist Daisy Mattson considers herself more of a survivalist than a gold digger. But when her new husband, Count Burkhart of Switzerland, dies, she suddenly becomes the head of an international luxury hotel chain, heiress to a fortune . . . and the prime suspect for murder.

Daisy’s sister, seventeen-year-old Jo, has chunky thighs, a penchant for wool cardigans, and a weakness for chocolate. In short, she’s the polar opposite of her glamorous elder sister. Pent up in an elite finishing school, Jo discovers a group of distinctly creepy girls who look straight out of Vogue, secretly speak Russian, and who just might have something to do with Count Burkhart’s death.

Enter a butler who’s more James Bond than Jeeves, a sexy Swiss ski instructor, a legendary monster in the decrepit villa across the lake, and a world-famous plastic surgeon who specializes in transforming women into living dolls. In the charming alpine village of Ober Spyri, the Mattson sisters race to clear Daisy’s name before she becomes the next one laid to rest in Château Burkhart’s family crypt.


If you are looking for an entertaining read, than, you have to check out this book. It was filled with quirky and lovable characters. Sisters, Daisy and Jo were stars of the story. When the story first started out I didn't really have much faith in either sister but they both proved me wrong. There was more to them than just their physical appearances. Both women did prove themselves to be good novice detectives. Although, they did have some help in the form of male support. There is the cute Rupert that catches Jo's eye and Giles, the mysterious spy.

With all of the fun characters, this made for laughs as well. Yet, the storyline was just as good. I had a good time trying to figure out the case but I didn't really do so much before the sisters did. There were some twists. Now, this is how cozy, who dun-it mysteries should be done. Fans of the author as well as new readers will shout for joy with this book.
Maia Chance