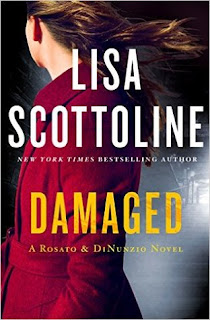 Damaged finds Mary DiNunzio, partner at the all-female law firm of Rosato & DiNunzio, embroiled in one of her most heartbreaking cases yet. Suing the Philadelphia school district to get help for a middle school boy with emotional issues, Mary ends up becoming the guardian ad litem of her minor client. As she goes up against Nick Machiavelli, her opposing counsel and the dark prince of South Philly lawyers who will use any means necessary to defeat her, she becomes more and more invested in the case—and puts everything, including her engagement to her longtime boyfriend, on the line.

Mary is kind. That is kind of the problem. I wanted Mary to have some more backbone and be a bulldog, where people were fearful of her but also respected her. It was like that is why people don't recognize your name as a partner in the firm. Yet, Mary was great with Patrick. She advocated for him. He was such a sweet boy that it was hard to imagine that there would be any malice but there was that time with the gun that did have you wonder, if Patrick was guilty; maybe not intentionally.

Additionally, this story felt like it could have been shorted up about a hundred pages. There was this added suspense part to the story that kind of felt like a bit of a throw away like the story could not sustain just the case so this extra layer had to be added to the story. I would not be complaining if the intensity had been stronger. It barely registered a three on my radar. Overall, not impressed. Yet, I know this author can write, so hoping the next book is better.
Lisa Scottoline