February 24, 2009
I want to thank Mike with Second Wind Publishing for sending me a copy of this book to review.
You can purchase a copy of the book here 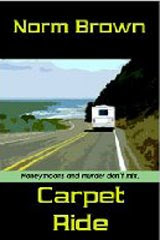 Sam Stanley and his family decided to rent a RV and take a vacation up through northern California to the Oregon coast. If they had know then what they know now, they would have stayed home. After many extricating hours traveling in the RV, Sam had almost reached their destination when he ran over something in the road. When Sam goes to investigate the object, it is gone. Same assumes whatever it was must have rolled off the cliff.

As Sam and his family are driving up to their house, they find the police waiting for them. They inform Sam that they would like to talk to him about the accident he had with the RV. The police take Sam down to the station. They tell Sam that the Oregon police believe the object Sam drove over was a man. His name is Robert Riddlin and he was from Boulder, Colorado.

Things go from bad to worse for Sam and his family. As his wife, Lynn has an accident and is taken to the hospital. Later someone tries to take Sam out for good with first a gas leak and then they break in to his home. Sam is ready to fight back. He asks for help from his friend, John Canton. John agrees to play detective and travels to Colorado. There he meets Cynthia “Cindy” Kildeer, a receptionist for Mr. Riddlin. She loved Mr. Riddlin like a father and wants to help any way she can. Together they start investigating in the murder of Bob. Their two prime suspects are Nathan Hanover, Bob’s co-partner and Katrina, Bob’s wife. And you thought your vacation was bad!
Carpet Ride is the first novel I have read by Norm Brown. I enjoyed the simple who-dun-it plot. The characters were believable. In addition to the fact that I connected with the characters which is always a plus. I was amazed at how much I really liked this book. I had a hard time putting it down. The only reason I did was because I read this book during my lunch hour at work, which was a big mistake, because I didn’t want to go back to work. Norm Brown is a mystery fan’s author. So go out today and pick up a copy for yourself of Carpet Ride.
Norm Brown