Having a paranormal experience with J.K. Coi

I am pleased to having author, J.K. Coi stop by my blog to talk about her newest book in the Immortal series.

Yep, I live with Immortals. Huge, stubborn warriors who barely know the meaning of compromise and never give up until they get exactly what they want. Difficult to reason with and impossible to out-muscle...but at least they don’t scare my neighbours and eat me out of house and home. They don’t leave the toilet seat up or throw their torn, bloodstained laundry on the floor. I don’t have to wrestle any one of them for the television remote, and they don’t destroy my living room with their swords when they’re training.

They just do all of that in my head.

Yes, I’m probably a little bit crazy (really, what writer isn’t?) but I’ve read the self-help books, taken the 12-step program, and I’m willing to admit it to the world: My characters are real to me – And they don’t necessary do what they’re told.

For example, when I began to plan out the series, I had a very clear picture of each of the men in each book and the roles they were going to play—The stoic leader (Rhys), the cocky bad boy (Baron), and the reluctant warrior (Gideon). Alric and the others were the necessary supporting characters who would help me flesh out the “real” heroes.

But just as I was finishing up Baron’s story, the entire series’ plot arc took a sharp twist—all because one of the other Immortals stepped forward, no longer content to stay in his “supporting role”.

Alric. In the first two books, we see him as strong and centered. His relationship with Diana is a perfect model of happily ever after. But in writing him as a secondary character, his past was slowly revealed to me; the horrible torture, the endless darkness, and the overwhelming rage. I needed to know how he had gotten through it, how he had escaped the certainty of madness to become the man he is now—and of course, the answer was Diana. She was his saviour, his light.

And then I was too intrigued by what he told me to set him in the background again, relegated to the sidelines. The questions and possibilities wouldn’t leave me alone. What would happen if that light were taken away, if darkness were to envelop him once more? What would happen if he were faced with his worst nightmare in the very image of the one person who kept him sane?

The story just had to be written. 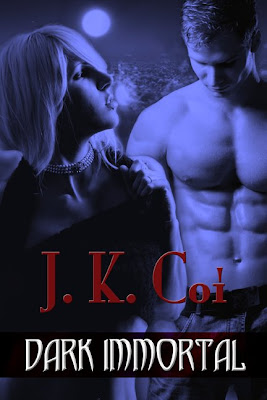 Five years of happiness, erased in one vicious act of violence.Diana freed Alric from his prison and the insanity of his own mind, offering him the kind of love only a fool would deny. Now she lies broken and comatose from a vampire attack, locked deep inside herself where he cannot reach her. Awakening in a strange bed, Diana has no memory of how she got there. The huge, muscled man leaning over her is straight out of nightmares full of blood and pain. Married to him? It can’t be true…even if her body craves his touch, and the anguish in his eyes shatters something deep inside her.Alric has no intention of giving up on the woman who never stopped fighting for him. His one hope is that time will heal her mind. But with a demon god poised to tip the balance of power, time is not on their side…

Please sign up for my newsletter: http://groups.yahoo.com/group/jkcoi/join, and visit me at my website for more information about upcoming books, chats, interviews, reviews, and all things Immortal: http://www.jkcoi.com/. I’m also on MySpace: http://www.myspace.com/jkcoi and I blog at http://www.jkcoi.blogspot.com/.

Thank you so much to Cheryl and the Book Nook for having me today!
J.K. Coi writes dark and edgy paranormal romance, where love is all consuming, the stakes are always high, and the immortals are to die for...
http://www.jkcoi.com/

J.K. Coi said…
Good morning! Thanks again for having me, Cheryl.

Kimber Chin said…
You won't regret it, J.Kaye and naida. I've read all three and LOVED them. Immortal Kiss is my fave because it was my first but Dark Immortal, wowsers, that one will make you cry.

I was laughing at the bloodied clothes on the floor. That would be challenging to live with (and why is it that after 10 yrs, my hubby still can't find the hamper?).
February 20, 2009 at 9:23 AM