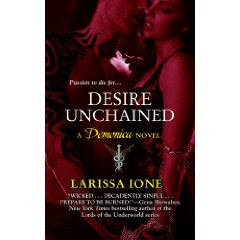 A long, long time ago; Runa Wagner fell in love with a stranger. She never expected to but it just happened. Shade is a Seminus demon. Though he has been with many women, he won’t soon forget the one that rocked his world.

Shade wakes up cuffed in chains and locked in a cell. Shade instantly realizes he is not alone. Runa has waited a long time to get her revenge on Shade. Now that this moment has presented itself to her, Runa starts having second thoughts. She deserves to get her revenge, especially since if it wasn’t for Shade, she won’t be living the life of a werewolf. Shade hungers for Runa. He needs her body and soul to provide him release. Is Shade’s want for Runa of his own accord or due to a curse put on him?

Shade and Runa make a great pair…a demon and a werewolf. This combination is a new one for me but a good pairing. They are both two sexy people who can’t keep their hands off each other. They are like magnets. The pull is too strong to keep them apart.

I have really gotten into the darker, more urban paranormal books. Desire Unchained falls into this category. It is edgier, a little more on the violent side, and all of the characters in this story kick butt! Desire Unchained is book two in the demonica series. Passion Unleashed is the next book that will be released. Larissa Ione is a new author to me. I am so glad that I discovered her sooner rather than later in this series. Now I only have to go back and read book one, so that I am ready when book three comes out.

Darlene said…
Hmmm, I've not read a demon and a werewolf before either. It does sound interesting.
February 18, 2009 at 2:22 PM

Penny said…
Oooh! I haven't read any demon/werewolf books either, but they sound REALLY good! I agree with J.Kaye and think I'll get book 1 first, though.
February 18, 2009 at 10:14 PM