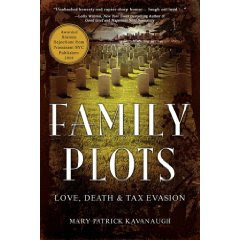 Family Plots: Love, Death, and Tax Evasion is a true life memoir on the life of Mary Patrick Kavanaugh. It is about Mary and how she fell in love with who she thought was her prince charming but ended up having a dark side.

When Mary first met her husband, Dan, he was very charming, handsome and a very loving guy to her daughter, Rachel. Dan made Mary feel beautiful and re-energized. Meeting Dan was a good turning point in Mary’s life. She started to get out of debt and had just gotten a job as a private investigator. Things were really going the way they were suppose to for Mary. After months of dating, Dan and Mary got married and became a family.

Mary had some odd feelings about Dan and his work. He always seemed to be working long hours either with Richard, his partner or in their basement. Mary really didn’t know what Dan did but whatever it was, he kept things behind locked drawers. Later Mary discovered Dan’s deep, dark secrets but by this time Dan’s debt was her debt as well. Mary didn’t know what to do but she did know that she needed to provide for her daughter as well as be there for her dying husband.

I sat down to start reading this book not knowing if I would really like it or not as to the fact that I have not read many memoirs. Since I began getting into reviewing books seriously, I have learned to venture out of my comfort zone and try new genres like reading memoirs. I am so glad I have as I have discovered and met so very nice and aspiring individuals. People like Mary Patrick Kavanaugh. Though all the hardships and hurdles that were thrown her way, she came out a fighter. She is now debt free and doing great. Despite all the rejections Mary has received for her memoir, I believe this is a great novel.

Anonymous said…
I have been thinking about buying The Last Lecture by Randy Pausch, just to mix up my reading list. I feel like I'm starting to get in a reading rut and with reviews like this, am now feeling brave to venture outside my usual genres. I'm going to add Family Plots my shopping cart on Amazon.com right now!
February 23, 2009 at 10:32 AM