Pemberley by the Sea 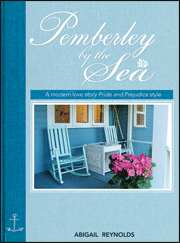 Cassie Boulton is a Marine Biologist. She has worked hard to get where she is today. So when dashing, rich Calder Westing the third arrives in her lab, she has nothing but annoyance for him. Calder convinces Cassie to give him a chance. She agrees but what seems like a great idea should have stayed an idea. Both Cassie and Calder’s families do not approve of each other dating. So their family’s mending ways get the better of Cassie and Calder and they break up. Now Calder will do everything he can to convince Cassie they belong together; even if this means he has to write himself as Mr. Darcy and Cassie as Elizabeth Bennet in his own version of Pride and Prejudice.

I have never read Pride and Prejudice so I can’t compare Pemberley by the Sea to the original but I did think that this version by author, Abigail Reynolds was a good one. Cassie stood up for what she believed in and that was marine life. She is also not afraid to voice those opinions. Like the time she criticized Calder for wanting to order fish. What I liked about Calder was that he came from a wealthy family but you would never know it from the way her acted. He is courteous as well as a heart that cares. There were a few dry spots, where I did start to lose interest but other than this, the book overall was a good one.

The Bookworm said…
I've heard good things about this book.
It does sound good.
Pride and Prejudice is one of my favorites.
http://thebookworm07.blogspot.com/
December 5, 2008 at 9:22 PM