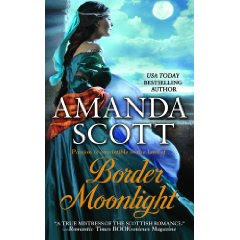 You could call Lady Sibylla Cavers the original runaway bride. Lady Sibylla had already left three men at the altar, one of the men being Simon Murray, Laird of Elishaw. Sibylla’s feels quickly change for Simon when together they rescue a little girl from drowning in the river. Just because Sibylla sees Simon differently does not mean she is ready to become his wife.

Simon still feels a little embarrassed and his ego bruised from Sibylla’s rejection of him. He won’t admit that to her. The longer Sibylla and Simon keep company with each other, the more intense the passion between them increases. Neither one of them wanting to give an inch but they just might have to band together. A battle may erupt when Border activities arise and could disrupt Scotland’s truce with England.

I found Sibylla and Simon to be very likeable characters. I admire females who are strong and independent like Sibylla. Simon being a Lord could have been stuck up but he wasn’t. He was nice, dashing and caring. Border Moonlight is the second book I have read now by author, Amanda Scott. She writes Scottish novels. She is great at her craft. She brings her characters to life in her books in addition to having the perfect romantic setting…Scotland. You can't go wrong with an Amanda Scott novel.
Amanda Scott

The Bookworm said…
this looks so good, i'm adding this author to my wish list now.
I love historicals, especially set in Scotland.