The Monster of Florence

December 30, 2008
I want to thank Anna with Hachette for sending me this audio book. 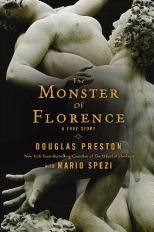 I have to admit that this is the first time I had ever heard about The Monster of Florence. Having said that, from what I heard about the accounts…I thought that Mario Spezi, a former crime correspondent and then newspaper reporter for La Nazione could be credited as one of the most influential people to help bring to light that Italy had a killer on its hands.

Author, Douglas Preston and his family were living in Italy for a while in the year 2000. This is where Mr. Preston first learned about The Monster of Florence as the olive grove behind the place they were living at, was the site of one of the murders. Douglas became intrigued by this information and seeked to learn all he could about this famous killer. Mr. Preston decided to go right to the source that could help him fill in the blanks…Mario Spezi. Together Douglas Preston and Mario Spezi met and set out to finally find the truth about who really was The Monster of Florence. In doing so, Mario Spezi was accused of involvement in the killings; in addition to Mr. Preston being accused of obstruction of justice, planting evidence and even being an accomplish to murder. Because of this, Mr. Preston can no longer return to Italy.

I listened to the audio version of this book. I have to say that while I found the recounting of this true story to be fascinating…if I had been reading the book, I know that I would not be agreeing with what I am saying now. This is due to Dennis Boutsikaris, who brought to life this story for me. I have always found true crime stories to be interesting. I have even tried reading a few of these types of books. I would find myself skimming over some of the parts in the book; because I would find them almost too much detail and it would start to bore me. I know this probably doesn’t make much sense. I am happy to comment through I have found a new way to enjoy these books in the form of audio books.
Dennis Boutsikaris Douglas Preston Mario Spezi

Linda Jacobs said…
Cool! I've only listened to a couple audio books but will have to try it again for a book like this!
December 30, 2008 at 2:26 PM